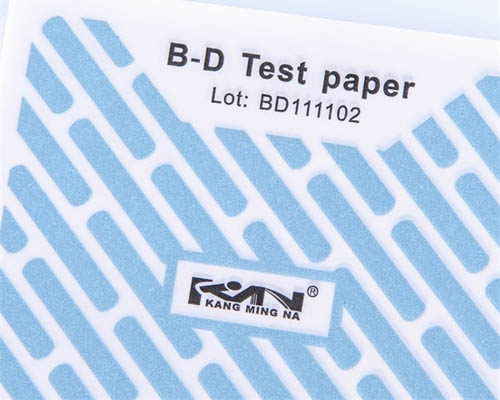 The bowie dick test is named after the surnames of developers J. H. Bowie and J. Dick. Originally this test was used to evaluate the vacuum process of single deep vacuum sterilizers, also known as high vacuum sterilizers.It is a diagnostic test for a sterilizer vacuum system. In particular, the test can assess an inadequate vacuum condition, meaning that air is not completely removed from the sterilizer cabinet or air leaking from the door gasket is left in the sterilizer cabinet. This residual air prevents the penetration of steam into the contents of the sterilizer cabinet during the steam exposure phase of the sterilization process. This diagnostic test used an autoclave tape to form a cross pattern on a piece of paper (St. Andrews cross). These sterilization indicator tapes are coated with chemical indicator lines. The paper is placed in the middle of a linen interwoven fabric having a folded layer of 29 to 36. The wrapped test package was placed above the ventilator outlet of the empty cabinet for 134 ° C, 3.5 minutes of sterilization.The above paper containing the sterilization indicator tape was taken out from the test bag and the uniform color change of the indicator line in the tape was observed. A non-uniform or shallow indicator line appears in the center of the paper (where the tapes cross each other) indicating that the vapor penetrates into the center of the test pack and is blocked. This non-uniform indicator indicates that steam cannot reach the central portion of the test bag due to the presence of residual air in the sterilizer cabinet. AAMI standard requirements for bowie dick test packageSince Bowie and Dick published their findings in 1963, the structure of the test kit, the design, and the operational characteristics of the sterilizer have undergone numerous changes. The cloth used in the standard test kit was changed from linen to cotton. An indicator test paper, which is referred to as an "air exclusion indicator", has replaced the sterilization indicator tape. The chemical indicator material is applied directly to the carrier in a design or pattern that covers 50% of the total area of the carrier. A test carrier (package) that is assembled by the user or manufactured by the manufacturer. This standard is called the "air exclusion indicator system" and has been replaced with a cloth test kit. This air removal indicator system is typically single-use and performs as well as a standard test kit containing indicators. Further, the pre-vacuum sterilizer on the market today does not use a single deep vacuum type but uses a pulsating vacuum type. In these pulsating vacuum sterilizers, its vacuum per pulse is not as strong as the old single deep vacuum sterilizer. In the United States, thebowie dick test test has an operating temperature of 132 ° C instead of 134 ° C.Althoughbowie dick test testing has been used for many years in most medical institutions. Until 1984, there was no way to evaluate the abovebowie dick test indicator test strips. The methods provided in this standard are the most basic test methods and performance requirements for both the user and the manufacturer of these indicators. Improvements in the original work, as seen at the 19th annual meeting of AAMI, allowed the evaluator to repeatedly produce the same test results, but did not require expensive laboratory equipment. Only a temperature logger is required, and the pre-vacuum pressure steam sterilizer is equipped with a timer that shortens the pre-vacuum stage.In order to test the performance of the air exclusion indicator (B-D test paper) described in this standard. The evaluator must be able to shorten the pre-vacuum phase of the sterilization process. This shortened or incomplete air removal creates residual air in the sterilizer cabinet. By varying the length of the pre-vacuum stage time, the amount of residual air in the sterilizer cabinet can be adjusted to achieve a 2 °C drop in temperature at the center of the standard test package. The temperature of 2 ° C refers to the difference between the temperature of the exhaust port and the temperature drop in the center of the standard test package due to the generation of residual gas in the cabinet. This 2 °C temperature drop (3.5 minutes, 134 °C) at the last minute of the steam exposure phase is the "standard error" as discussed in 5.2.2 and 6.2.2. Using a timer, this shortened pre-vacuum phase is accomplished by iteratively groping until the desired 2 °C temperature drop is achieved. This residual air is squeezed into the center of the test pack during the exposure phase of the sterilization process.The steam exposure detector (Attachment G) used for testing is referred to as a pre-vacuum pressure steam sterilizer used by medical institutions. The medical facility has or does not have a single deep vacuum (high vacuum) sterilizer. However, it is not necessary to use a pre-vacuum exposure phase of a particular model for testing. The ability to repeat the "standard error" that produces the same requirements is all that is necessary. Not all pre-vacuum sterilizers meet the necessary conditions for adjustment to produce a "standard error." For example, some sterilizers do not allow the operator to maneuver into the steam exposure phase before the sterilizer completes its proper pre-vacuum phase. These sterilizers cannot be used to testbowie dick test test materials. 5.2.1 and 6.2.1 include test temperatures other than 134 °C. These test temperatures are applied to sterilizers used by indicators outside the United States. Medical institutions in the United States use an FDA-approved 132°C pre-vacuum sterilizer. The sterilizer is set to operate at a temperature of 121 ° C and is also used in markets outside the United States. Because this standard is an international standard, it includes sterilizers that are not approved by the FDA for use in the United States, so it shows other sterilization temperature performance. The indicator is not suitable for use in the US market.